Posted on September 27, 2010 by batteryrooftopgarden 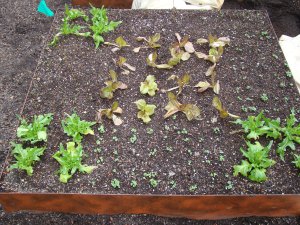 First lettuce and spinach crop sown according to the square foot method, May 19, 2010

At end of May and in early early June additional crops were planted, and seedlings transplanted to permanent locations, including Potatoes, Lettuce, Spinach, Arugula, Mizuna, Scallions, Beets, Parsley, Scallions, and Onions.   Compare the photos (June 21, 2010) with the pictures above from mid May.  What a difference month makes.

This entry was posted in Planting 2010. Bookmark the permalink.