Bugs on the Roof: Pollinator Diversity

Posted on May 31, 2012 by batteryrooftopgarden

Visitors to BRTG could be forgiven for thinking that some late-night fresh-mint-mojito-fueled madness had resulted in the plastic drinks cups scattered across the garden, curiously half-buried in the soil: 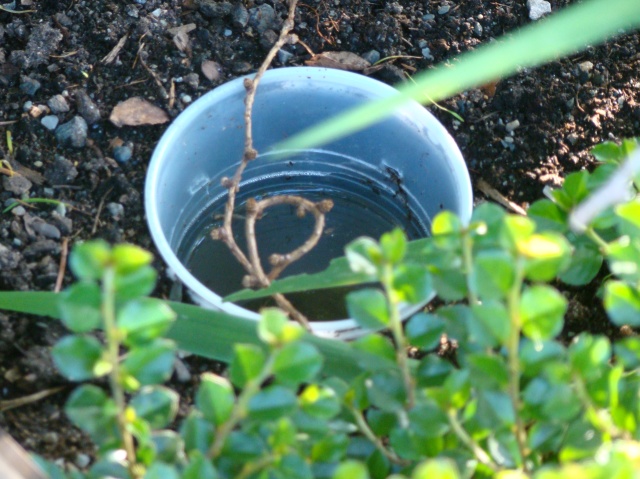 But they would be wrong.  One of the arguments for urban green roofs is the creation of habitat and promotion of species diversity.   And in converting the roof from an extensive green roof with only a handful of varieties of Sedum and grass to an intensive roof with hundreds of varieties of native and non-native trees, shrubs, perennials and edibles, the gardener intended to test the hypothesis that increased plant diversity would support a greater diversity of animal life, especially the pollinators so necessary for the success of urban agriculture.   With two seasons behind him, BRTG decided it was time to test this hypothesis in a more rigorous way.   With the help of Scenic Hudson’s brilliant conservation scientist Sacha Spector, we contacted Professor Matthew Palmer, Director of Undergraduate Studies in Ecology, Evolution and Environmental Biology at Columbia University.   Professor Palmer, who has studied the environmental effects of green roofs for years, suggested that BRTG be added to a study being conducted by one of his graduate students, Jeremy Law.    And so, BRTG this summer will feature a variety of low tech (plastic drinks cup) and higher tech devices to measure the number and diversity of bugs.   Jeremy Law explains in rather more scientific terms:

“Various bee species (Hymenoptera: Apoidea) have been subject to long-term declines throughout North America. However, little evidence has shown that hoverflies (Diptera: Syrphidae), which also play an important role in pollination, are facing comparable declines. Recently, researchers have begun to explore how properly designed and maintained urban environments may provide suitable habitat for native species. Green roofs are rooftops that have a vegetated surface and substrate constructed atop an engineered membrane that provide a variety of ecosystem services including stormwater retention and temperature regulation. Urban meadows are another potentially important and unique, yet under studied, habitat for pollinators in the urban environment. In this study, I will compare the pollinator diversity of green roofs and urban meadows and determine what factors influence how suitable green roofs and urban meadows are in providing habitat for pollinators. From April through October, 2012, I will sample insects using sweep netting and pan trapping each month from 11 green roofs and 10 ground-level urban meadows found in parks throughout New York City. I will identify specimens to genus, while J.S. Ascher (AMNH) and F.C. Thompson will verify and identify to species. I will calculate species richness and abundance and compare them to various landscape characteristics using ArcGIS to determine what factors influence pollinator diversity on green roofs and in urban meadows. This study will likely provide information on the role that green roofs and urban meadows play in providing habitat for native pollinator species and aid in the development of guidelines for their location and design to promote pollinator activity and diversity.”

Readers of the BRTG blog will be among the first to know the results.

4 Responses to Bugs on the Roof: Pollinator Diversity