Posted on February 10, 2016 by batteryrooftopgarden 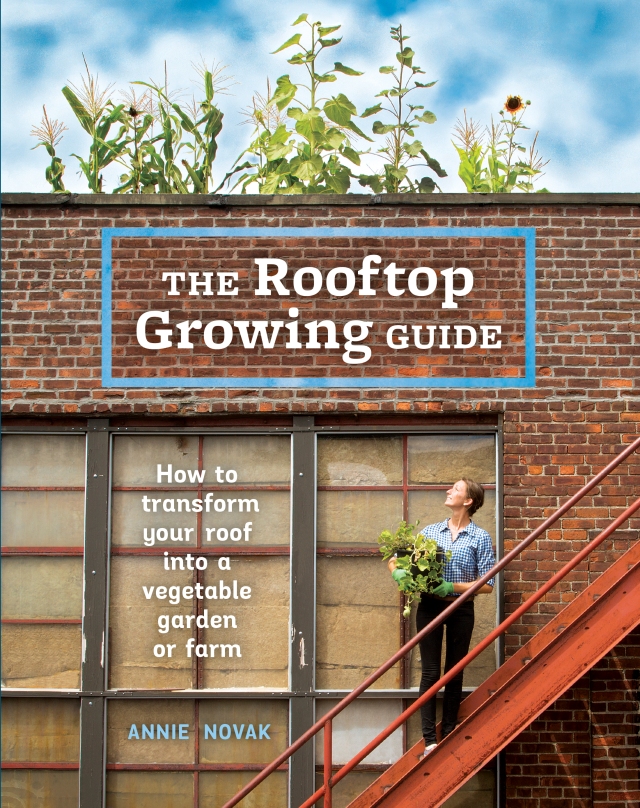 Since the 18th century the country’s heartland has sprouted a hardy crop of farmer philosophers. The 21st century Brooklyn-based example of this great American type is Annie Novak. Her new book, The Rooftop Growing Guide (Ten Speed Press, available February 16) not only gives us the perfect recipe for rooftop soil, but quotes Virgil and Proust. She invokes Aldo Leopold before revealing the mysteries of growing vegetables in containers. The sensibility of Wendell Berry is woven into every page. The barriers between rural and urban, ground and roof, and ancient and modern all collapse as Annie Novak invokes the timeless and universal connections between humans and their food. The reader soon discovers that vegetables have not been the only yield from seven years of rooftop gardening; Annie Novak’s harvest includes a bumper crop of wisdom.

As someone who has developed and maintains a large rooftop garden, I know first hand the scarcity of sound advice.  There are few experts because there are few people who have been doing rooftop farming long enough to make the transition from student to teacher.   Annie Novak has, and is the country’s most authoritative source on the subject. But authority is one thing; the ability to translate that knowledge for the uninitiated is another. Rooftop Growing Guide does this beautifully. It is supremely well organized, user friendly, and clear.   So it’s simple:  If you have a green roof, think you might someday have one, or even dream of growing tomatoes on your fire escape, you need to own this book.

But even if you don’t have a rooftop farm in your future, anyone interested in urban agriculture – whether from the perspective of environmentalism, public health, or urban planning – will profit from spending a couple of hours with the book.   You will come away understanding what rooftop agriculture really looks like, and having explored the many aspects of the case for growing food in the city.

And, for the followers of this blog, you may be interested in the photographs of Battery Rooftop Garden and will enjoy a lovely short essay by Annie on the creatures that make this garden their home.   Annie Novak has been the farmer-in-chief at BRTG since its inception. I hope you will support her, and indulge yourself, by buying the book.

1 Response to The Rooftop Growing Guide