Posted on August 16, 2011 by batteryrooftopgarden

Google “green roof orchard” and you will get . . . two, that’s right, two results.  Neither relevant.   A little more creative googling pulls up some useful information about growing fruit trees in containers, but little other than speculation about the performance of fruit trees on a green roof.

So, here’s my report.  My orchard was planted in the spring of 2011, thus it’s been through only a single winter on the roof.  Last summer’s yields were spotty:  the Redgold nectarine (Prunus persica var. nucipersica) did superbly, as did the Asian pear espalier (with laterals of Shinseiki, Chojuro and Nijisseiki, pictured in the banner at the top of this blog’s home page).  The European pear managed only a single large fruit, the apples were desultory, and the peach slumbered.  Being the first summer, I did not draw any conclusions.

Now, in their second summer, without any spraying or fertilizing (but some judicious pruning), here’s the score:  The winners are the freestone July Elberta Peach (Prunus persica ‘July Elberta’), which is bearing magnificently and whose fruit is exactly as soft, sweet and juicy as advertised, 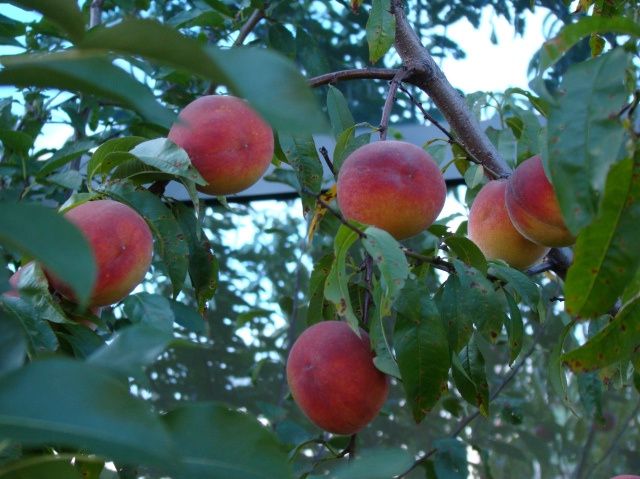 and — again — the Redgold Nectarine:

The ‘July Elberta’ is advertised as a mid-season fruit, bearing before the original ‘Elberta,’ and as of today has started to drop the ripe fruits, with dozens and dozens of harder fruits remaining on the tree.  The Redgold Nectarine is healthy and prolific, but not yet ready to eat.

The ‘Moonglow’ pear has doubled its yield to two fruits, both objects of great beauty. 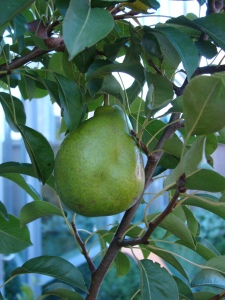 I am satisfied with this.  If it doubles its yield each year as it settles into life on the 35th floor, the inexorable laws of mathematics will assure a good yield in a very short time.  The apples, alas, remain rather pathetic in both the quantity and quality of their fruit – so some research on organic spraying is on my list.  And finally, both the European pear espalier and the Prunus domstica (Stanley Prune Plum) are obviously still putting their energy into rooting and adjusting to the roof, and have not had time or energy for sex and its rewards.   The Prunus is not self-pollinating, but I doubt this is the problem, as pollinators are prolific at the Battery Rooftop Garden.

Finally, in celebration of my champion Peach, I offer you a live portrait of its fruit,

and two all-peach still-lives from my peach still-life collection.  On the left, the marvelous A Tabletop of Peaches (1869) by George Henry Hall (1825-1913),

and on the right, the contemporary Ripe and Ready by Wendy Higgins: 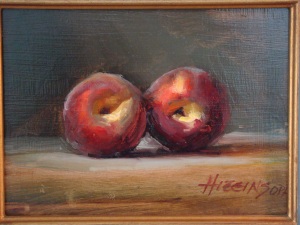 At the Cold Spring farmer’s market on Saturday, the peaches were not ripe.  Returning to lower Manhattan today, I was treated with a dozen perfectly ripe peaches on the roof (that was a couple of hours ago, only eight left now).   My advice — add a peach tree to your green roof.