A Tale of Two Sorrels

Posted on December 14, 2011 by batteryrooftopgarden

Plants are natural contrarians, delighting in bucking the conventional wisdom by growing in shade when they are said to require sun, becoming giants when they have been bred to remain dwarf in stature, and prospering in limey soil when the experts tell you that anything less than harsh acidity will be fatal.    This contrarian streak becomes more pronounced when plants find themselves adapting to life on the 35th floor of a sky-scraper in the Financial District of Manhattan, something for which they are ill-prepared by evolution.

Take my Sorrels.   Two more hard-working plants would be hard to find.    The first, Rumex sanguineus, is called by its commercial promoters “Red-Veined Sorrel,” which the seed-catalog writers presumably determined was less of a deterrent than the traditional “Bloody Sorrel,” or even better, “Bloody Dock.”  She is a real showstopper:

The photo above is from mid-autumn.  And now, after two deep frosts, she has wilted not one bit, but her veins have thickened, deepened and darkened, as if to prepare for the rigors of winter on the roof:

Only a real connoisseur of bitter greens would enjoy the bloody thing raw, even in its mildest state during the height of summer.  And now, although maintaining her looks, she is distinctly bitterer  — suitable, if truth be told, only for cooking.  But she will anchor the front of the veggie patch beautifully all winter:

In contrast, Rumex acetosa is looking a little beat-up, but still delivers a wonderful lemon flavor to salads or soups:

I have been calling her “Lemon Sorrel,” but find little support for that name, which is correctly “Common Sorrel,” or incorrectly, “French Sorrel.”   Either way, she is supposed to peak in late spring, bolt and seed into a chaotic mess during the summer, and then retire from the field as an annual at the depth or our Zone 6 winters.    But no, not these plants.  They do bolt, but surrender to some aggressive cutting of the bolting stems and flowers, and revert for the balance of the summer to obedient production of delicate and flavorful leaves.  And rather than expiring as instructed under the assault of a terrible roof-top winter, she came back swinging last spring. 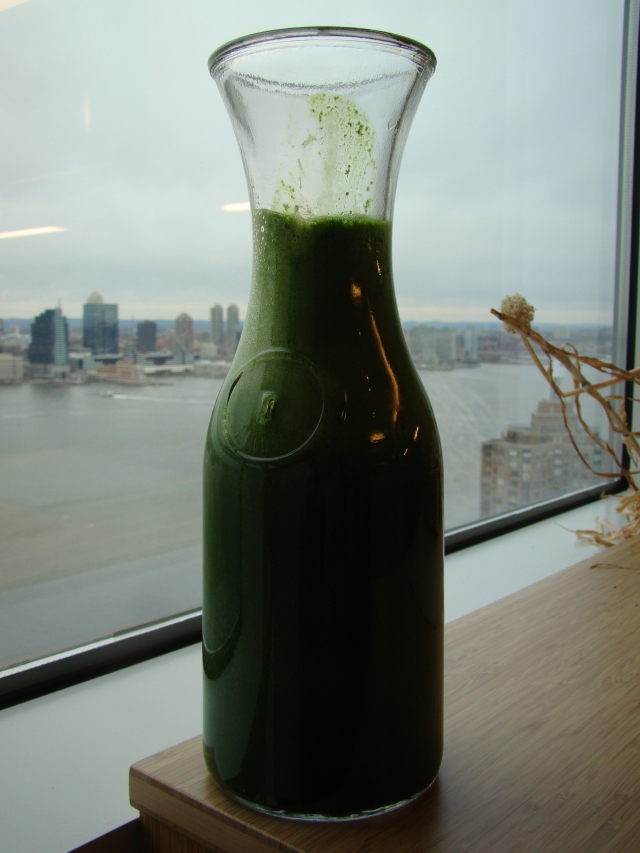 morning’s fresh batch of kale juice (rendered slightly more congenial by the addition of some sorrel and apple).

Your blogger is now retiring to the vessel below (seen from the green roof on her last visit to New York) for a couple of weeks to finish a book, but promises news from the cold frame in January.

This entry was posted in Uncategorized. Bookmark the permalink.

2 Responses to A Tale of Two Sorrels