What zone is this?

Posted on January 31, 2012 by batteryrooftopgarden

One of the first things that gardeners learn is their plant hardiness zone, a helpful construct of the USDA based on the expected low winter temperature.   Plant and seed catalogs helpfully tell us the coldest zone in which a plant will survive the winter, i.e., the expected geographic limit of its hardiness.  Those of us in Zone 5, for example, are not supposed to try to grow plants supposedly hard only to Zone 7.

Newbie and chronically cautious gardeners follow this rule slavishly.  The rest of us, infected with the horticultural variety of the audacity of hope, consistently push the limits of hardiness, convinced that our microclimates or special skills will give birth to one of those not-so-rare gardening miracles, such as a plant that prefers the tropics nonetheless surviving for years in a New Jersey backyard.    In most cases, it’s not gardening skill that is the explanation, but microclimate.

Microclimate refers to the particular environmental conditions in a specific place.   Higher places are colder and more exposed to the wind that low ones, although the bottom of small slopes can also be frost traps.  Places adjacent to large bodies of non-freezing water  are buffered from the extremes of very cold nights.  South facing walls hold and radiate back the winter sun.  You get the idea.

Last week, the USDA published, for the first time since 1990, a new and much-improved version of the plant hardiness map familiar to all gardeners (www.planthardiness.ars.usda.gov/).  Climate change advocates, on both sides, argued about the obvious zone shift reflected in the map (average winter low temperatures increased in most zones).  But gardeners were thrilled at the new granularity in the digital, GIS-enabled interactive map, which is based on 30 years of actual temperature data from thousands of local weather stations, and computer manipulated to reflect differences over distances as short as 1/2 mile.  This meant that, for the first time, the effects of urban heat sinks, altitude and proximity to water would be reflected.

The Battery Rooftop Gardener was quite astonished to find that the BRTG has been promoted to Zone 7b, which means the average low temperature over the past thirty years was 5.8 degrees Farenheit, and ranged between 5 to 10 degrees.  This result is clearly driven by the immediate proximity of New York Harbor and the warming effect of the dense construction in downtown Manhattan, for just over the Hudson River — less than two miles away —  the inland portion of Jersey City transitions to Zone 7a (which is colder), and most of the land we see from the garden looking to the west, starting along a line that runs through West Orange and Milburn (New Jersey), falls to the significantly more frigid Zone 6b.

What roof-top farmers want to know, and what the folks at the USDA haven’t yet told us, is what adjustment should be made, within a zone, if your garden is heated from below by a warm building, and sits at a considerable height above street level with the cooler temperatures and exposure to wind resulting from this altitude.   I’m guessing that BRTG is about 450 feet above sea level, and set out to find what adjustment to my new Zone 7b status should be made to account for this.

A small bit of research revealed that scientists use a rough guide to adjust for the effect of altitude on temperate — the rate of cooling, when the air is still and of uniform humidity, is referred to as the “environmental lapse rate.”  For the first 36,000 feet above sea level, this is 3.56 degrees Farenheit per 1,000 feet.  A quick bit of math reveals that the low temperature here on the roof would ordinarily be less than 2 degrees colder than on the ground.  Because this is a well-insulated LEED ‘Platinum’ building, I am guessing the heat leakage from below is minimal.  On the other hand, the exposure to high winds is quite extraordinary.  So, on balance, I have concluded that BRTG should be demoted one notch to Zone 7a.  I’ll take it.

Here we are at the end of January, and this is what Zone 7a means 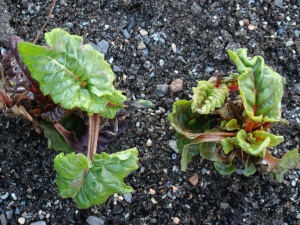 for a winter roof-top garden, with irrepressible chard putting on fresh growth, and iron-clad kale refusing to acknowledge the seasons altogether.

3 Responses to What zone is this?