Posted on December 3, 2013 by batteryrooftopgarden

Plants, like people, tend to get around.  A plant on my roof got its start in China about 2000 years ago, and by the 8th century AD found its way into Japan.   When it arrived in Nepal and the Himalayan states of India, it was cultivated at elevations above 1500 meters, thus showing early aptitude for life on the roof of a tall building.  The fruit of this tree is so susceptible to bruising that it was traditionally hand carried from the mountains to markets below.  In Japan, even today, each fruit is separately wrapped and a single fruit is often presented as a special gift.  Stumped?

I refer of course to Pyrus pyrifolia, most commonly known as the Asian Pear.   So how did this delicious fruit, at once juicy, crispy and sweet, avoid the clutches of global commerce?  It has two characteristics that recommend it to the home orchardist, but make it deeply unattractive to the industrial food system: First, its fruits will ripen only on the tree; once picked, no amount of chemical bombardment or environmental manipulation will cause it to ripen further.  Second, its off-the-charts moisture content means it bruises easily, so is difficult to transport, and when processed, collapses into incoherent mush.  In other words, the perfect fruit for urban agriculture:  let it ripen on your roof, pick by hand, walk it gently to the table, eat raw, be happy.

Making it even more irresistible is its hardiness.  The USDA considers it hardy to Zone 4, but some Chinese cultivars are reported to have survived minus 30 degrees Fahrenheit.  At the other end of the spectrum, this Pyrus shrugs off the heat and humidity of New York summers, and after five years, can get by with little water.  And if your roof isn’t big enough for a tree, then try an espalier, as I have at BRTG: 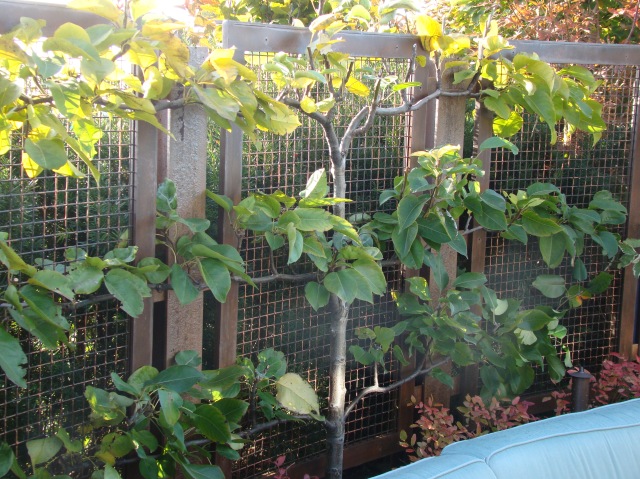 In addition to size, an espalier will allow you to mix multiple cultivars of Pyrus pyrifolia on the same plant.  At BRTG, three cultivars of Asian pear are grafted on to the same standard:  ‘Chojuro’, meaning “plentiful,” one of the oldest (cultivated in Japan in 1893); the more familiar ‘Nijisseiki,” which means “20th Century” and dates from 1898; and ‘Shinseiki,’ meaning “new century,” perhaps the most familiar to North American orchardists, known for its pale fellow skin and reliable production of fruit in late August.

Many people have asked what fruit appears in the banner photograph running across the top of the home page of this blog.  Now you know.

This entry was posted in Asian Pears, Fruit, Pears. Bookmark the permalink.

4 Responses to The Perfect Rooftop Fruit