Posted on February 18, 2014 by batteryrooftopgarden

Just before the ground re-froze,  we harvested some sweet winter carrots and were rather amazed when this giant emerged from the relatively shallow soils of its rooftop bed:

I’ve always been drawn much more to the qualitative than the quantitative, and initially focused on the question of how to cook this giant, and how it would taste.  But then something strange happened.   A voice deep within the limbic brain offered the tantalizing suggestion that mine might be bigger than anyone else’s.   It could be a record-breaker.  Sharing some deep genetic predisposition with every kid obsessed with the 4H prize for biggest pumpkin at the county fair, I set out to investigate whether I too might claim a prize to validate my prowess in drawing sustenance from the soil.

I turned, of course, to the good folks at the World Museum of Carrots (motto: “Discover the Power of Carrots”), who gently suggested that if I were after a record, the parameters would have to be defined rather narrowly.  After all, the world record weight was 18.985 pounds (a carrot grown in Alaska) and the world record for length was 19 feet 1.96 inches (the UK).   But the World Museum of Carrots is open to other types of carrot-related prize-winning feats.  After all, they track the records for most carrots peeled and chopped in a minute (515 g), most baby carrots fit in an open mouth (25), and most carrot chews before swallowing (96).  I was encouraged.

Researching the record books for New York State, I was disappointed to find no claim for state-champion carrot (only a nice lady from the Hudson Valley as pleased with her one-pound carrot as I am).  Nor were there any reports of tuberous immensity (I know, it’s a root not a tuber) from community or roof-top gardeners in New York City.

So, I have decided to publish a challenge:  I claim that this magnificent root, weighing in at one pound, is (i) the largest carrot ever harvested from a green-roof garden ever (anywhere in the world) and (ii) is the largest carrot harvested south of Canal Street in Manhattan during the past two centuries.    Anyone wishing to contest these claims is encouraged to send along a photograph or other evidence, and I will graciously and publicly withdraw or modify my claim.   Until then, we’ll add record-breaking carrot to the achievements of Battery Rooftop Garden.

As apology and explanation for this irrational outburst, I offer the following photographic evidence of current conditions on the roof – enough to drive any gardener mad. 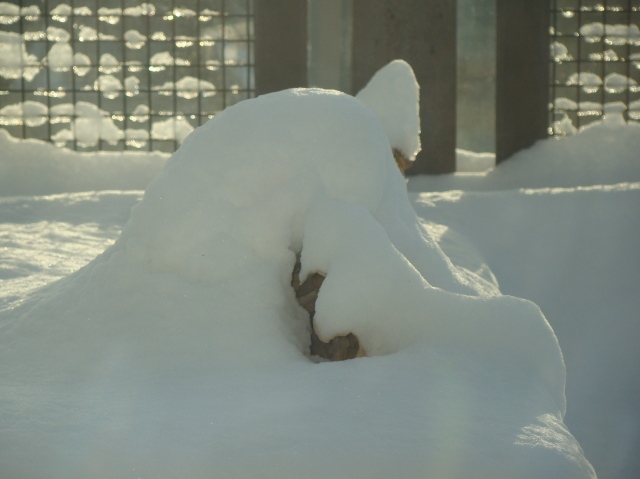 This entry was posted in Carrots, Weather. Bookmark the permalink.